Fed Chair Jerome Powell gave his annual speech at the (virtual) Jackson Hole Symposium early Friday morning, a day after 13 U.S. servicemembers were killed, along with nearly 200 Afghans in a terrorist attack at Kabul’s international airport in Afghanistan. As the U.S. rushes to evacuate allies in the country, the geopolitical tension added tumult to an already-jittery market awaiting Powell’s comments and assessing the Delta variant’s risk. Powell’s remarks on Friday were on par with recent speeches but provided more hints on what the path forward may look like for U.S. monetary policy and what the Fed is watching. Powell signaled a potential start to tapering of bond purchases beginning before year-end. Direct interest rate increases are likely to come significantly later, barring any material economic changes.

In light of the attention paid to the Fed’s next moves, we thought it prudent to examine what the Fed’s mandate (job) is, and what their actions can mean for investors in the marketplace.

To review, the Federal Reserve strives for two things in the economy: inflation averaging 2% over the long-term and maximum sustainable employment. When the Fed believes these two conditions are present, they will begin easing monetary policy, or “tapering”.

Regarding inflation, this goal seems to have been met. The Fed Chair firmly reiterated his stance that the current bout of inflationary pressures is “likely to prove temporary” and inflation should settle back down closer to the Fed’s target. July inflation, as measured by CPI, was flat compared to June at 5.4% annualized. Looking into the data, Powell’s stance is fairly well-supported. A few areas that have contributed to the elevated inflation readings such as used car prices, energy prices, and transportation service prices started to ease in July. Used car prices rose 10%, 7.3%, and 10.5% in April, May, and June, respectively. In July, they rose 0.2%. At an annualized rate of 41.7%, it's unlikely used car prices continue to increase at this rate. Energy prices in the first three months of the year rose 3.5%, 3.9%, and 5%. Through July, energy prices are rising at 23.8% annualized. Sustainable? Likely not.

Notable exclusions in the inflation measures are home prices and wages. Home prices have risen roughly 16% since 2020 according to Redfin and MLS data. Wages have seen increases during the year as worker shortages span the globe but still haven’t risen dramatically. Larger and persistent wage inflation is an item to watch, as this could lead to higher inflation levels for longer. 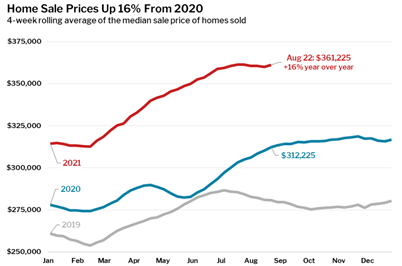 The second piece of the Fed’s easing puzzle is maximum sustainable employment. “More progress has been made” according to Powell, on this goal. July employment data showed employers adding 943,000 jobs with the unemployment rate falling to 5.4%. The unemployment rate dropped to 3.5% just prior to the pandemic, the lowest level in 50 years. At the height of the pandemic, the unemployment level rose as high as 14.8%. It’s easy to see people have started returning to work but how low can that number go? Millions have retired early during the pandemic and Census Bureau data estimates over 4 million new businesses were started in 2020. A lot of people simply aren’t returning to their old jobs. Enhanced unemployment benefits instituted during the pandemic will continue to be distributed through September 6th. 13 million people were still collecting aid through July, with 9 million still receiving pandemic-specific assistance. This progress in unemployment has likely been enough for the Fed so far, but it’s still foggy on whether the economy will return to pre-pandemic employment levels, which was the Fed’s original goal. Regardless, the data seems to be trending in the right direction.

Inflation and employment data suggest to the Fed it is likely time to start its taper.

What is the Fed “Taper” and What Will That Mean for Markets?

The Fed raising interest rates and tapering monetary policy are different things along the same lines. Since the beginning of the pandemic, the Federal Reserve has been purchasing Treasury securities and mortgage-backed securities in the open market at a pace of $80 billion and $40 billion per month, respectively. This, like keeping interest rates low, is a stimulative measure. Keeping interest rates low is somewhat easy to understand – lower rates equal cheaper borrowing, and cheaper borrowing equals more borrowing. More borrowing equals more economic activity. The Fed’s bond-buying program is supportive because it helps keep bond markets liquid. If investors need to sell their bonds for liquidity and there are no willing buyers, bond prices would fall, and yields would spike higher. This would cause massive losses for bond investors and large bondholders like insurance companies and pension funds. Deterioration of pension funds and insurance companies would cause massive trouble.

The taper side of the monetary easing simply means the Fed will reduce the amount of bonds they purchase each month until they eventually cease all buying, in theory. This posits that the market will be healthy enough to support itself without Fed intervention. However, as the somewhat shocking data below shows, the Fed’s influence on the Treasury market is immense and the Treasury market is the baseline for all bonds. The Federal Reserve currently owns over 50%(!) of the outstanding Treasury bonds maturing 10-20 years out. As these purchases are reduced, it’s hard to imagine that yields at the long end of the curve won’t rise or at least become more volatile. This may well create a tough environment for traditional, longer-term bonds moving forward, similar to what we saw in March when bond yields spiked and sent bond funds lower. 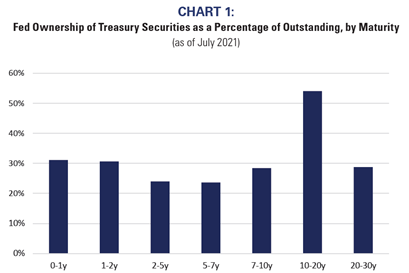 How about equity markets? Many investors may not pay attention to the Fed’s actions and make the mistake thinking Fed actions do not influence the stock market. Over long periods, equity markets are driven by GDP growth or economic growth in general, which is heavily influenced by monetary policy and interest rates. Since 1980, the rate of real GDP growth has been slowly declining or stagnating.

The other thing that has been falling since 1980 is interest rates.

This has continued to be true since the Great Financial Crisis in 2008-2009 where almost no uptick in the rate of real GDP growth has been seen and interest rates continued lower. However, the stock market has been in a record bull run since then. What has increased, almost in lock-step with equity markets since then, is the Fed’s balance sheet, or our national debt. Further, since COVID hit we’ve not only seen massive monetary stimulus, but also massive fiscal stimulus. With this backdrop of enormous amounts of money flooding the financial system and easy borrowing conditions, it should be no surprise that markets have been trending upwards.

The market has signaled multiple times since then that it doesn’t want the Fed to tighten monetary policy. The market may very well understand all the stimulative policies are boosting the economy, and markets. We saw this in 2013 with the “taper tantrum” and again in 2018 when Powell began raising interest rates. In both cases, markets experienced a significant sell-off on news of tightening policy. Why? When the Fed raises interest rates, borrowing becomes more expensive and economic activity tends to slow. The same goes with the Fed’s bond-buying. Without the Fed pumping more liquidity into the system, supporting markets, there is simply less easy money available in the system and more volatility can come through as conditions tighten.

An added difficulty for the Fed is of course the COVID pandemic and the Delta variant. We’ve seen massive economic growth following the pandemic, and more importantly, high expectations for growth. Markets are forward-looking and the growth expectations priced into the markets leave risk on the table should the Delta variant, geopolitical issues, or an external shock inhibit this growth. The Fed is trying to move slow and act strategically, but investors should be aware that the Fed’s actions over the coming months may affect markets in a real way. Even telegraphing their moves may not be enough to override the underlying economics associated with halting a red-hot economy dead in its tracks.

This is not a warning of impending doom, but simply a reminder for investors to understand where our economy sits and some of the driving economic forces that flow down to stocks and bonds. It’s important for investors to remain invested, remain diversified, and to think strategically about the investments they make. Please reach out to us if you have questions or want to discuss any of the aforementioned topics in more detail.