Less than a week before officially taking office as the 46th President of the United States, Joe Biden outlined his $1.9 trillion legislative proposal aimed at combatting the human and economic toll the coronavirus has taken on the nation.

January 21st, Biden’s first full day in office, will mark the grim one-year anniversary of the first confirmed COVID-19 case in the U.S. Since then, the U.S. has reported over 23 million cases with over 384,000 deaths according to Johns Hopkins. To compound those harrowing numbers, data released Thursday showed another 965,000 Americans had filed for unemployment, the highest number since August. 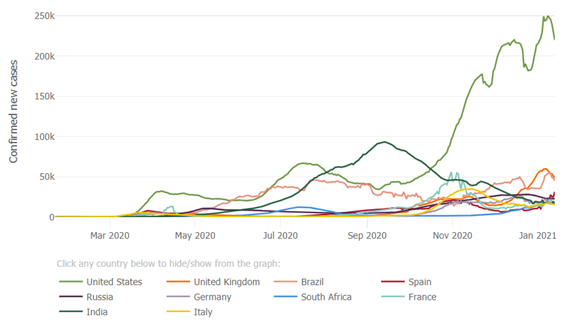 President-elect Biden’s proposal, dubbed the “American Rescue Plan”, contains a bevy of fiscal support including a round of $1,400 direct payments, a $1,000 increase to the child tax credit, another $600 for children under 6 years old, $400 billion to directly fight COVID with initiatives like mass vaccination centers, $50 billion to expand testing, and the remainder going mostly to state and local governments.

Another notable inclusion in the plan is the $15 federal minimum wage Democrats have long been pushing for. It does not include other policy measures the Biden administration will likely lobby for once COVID is subdued. These include items like student loan forgiveness, an infrastructure bill promoting renewable energy, climate change initiatives, addressing the strenuous relationship with China, additions to the Affordable Care Act, and others.

Financial markets in the U.S. did not seem to initially react with many surprises to the proposal. Equity market futures in the U.S. were down modestly late into Thursday night with both the S&P 500 and Dow futures hovering around 15-25 bps lower than the Thursday close. NASDAQ futures were relatively flat. Futures did start declining with more conviction in the early morning hours of Friday. The 10-year U.S. Treasury yield dropped to 1.10% late Thursday after peaking at 1.18% mid-day Tuesday, signaling investors may still be a little wary of the months ahead.

Thursday was a busy day and night for financial markets to digest. Coupled with President-elect Biden’s stimulus package announcement, Fed Chair Jerome Powell explicitly said the Fed is in no hurry whatsoever to start raising rates again or to pause its purchasing program.

None of the above news should shock investors. Once it was clear Joe Biden would be elected President markets began pricing in another large fiscal stimulus. That became even more likely last week with Democrats sweeping the U.S. Senate runoff elections in Georgia to split the Senate 50/50, and Fed Chair Powell has repeatedly hinted that the Fed will keep monetary policy loose for longer if needed. Even if inflation picks up as many expect, the Fed’s 2% target inflation rate would need to become the norm and more importantly, employment numbers would need to improve before they consider reversing course.

With cheap borrowing costs, low yields in traditional fixed income markets, more money flowing into the system from policymakers in Washington, and COVID continuing to suppress economic growth, supportive conditions for equities should persist. In the near term look for high-growth sectors like Technology, emerging markets, and small-caps to continue their outperformance. As vaccines are widely administered and the economy begins its return to normalcy look for out-of-favor styles like Value and beaten-down industries like travel, hospitality, energy, and transportation to rebound. 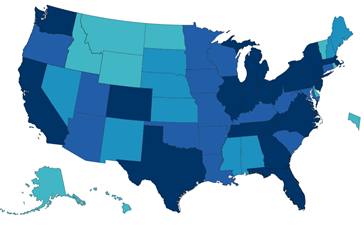 As is the case in all economic environments, time in the market beats timing the market. Stay disciplined, stay invested. To quote the great Charlie Munger, “The big money is not in the buying and selling, but in the waiting”.